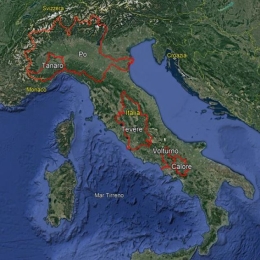 Annalina Lombardi demonstrates that that areal precipitation estimation including satellite information in addition to surface observations has a high performance compared to that which uses only the rain gauge data.

Satellite-based remote sensing provides a significant contribution for hydrological predictions due to its wide coverage and increasing tempo-spatial resolutions. Although current observed areal precipitation estimation is mainly based on point rain gauge measurement interpolation, the ability to deduce spatially distributed data from point measurement depends on the design and density of the sensor network.

A possible approach to have a correct representation of the rain field at the hydrological scale (up to a few hundred meters) could be to merge rain gauge data with gridded rainfall data obtained from remote sensing techniques, and the availability of such data in near-real time is a unique opportunity for the operational hydrology community. In this study we propose the application of advanced downscaling techniques based on Cellular Automata Algorithm for rainfall spatialisation using satellite precipitation products for hydrological applications. The method proposed to merge rainfall estimates measured in different spatial scales is based on the data assimilation concepts with particular emphasis on the transformation of point data to areal data. The work wants to prove that the areal precipitation estimation including satellite information in addition to surface observations has a high performance compared to that which uses only the rain gauge data.