A complete meteo-hydrological chain to support early warning systems from weather scenarios to flooded areas: the Apollo medicane use case 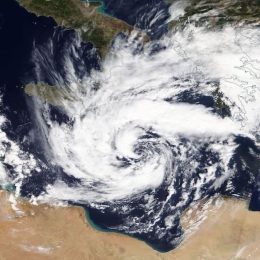 Antonio Parodi presents a critical review of the forecasting performances of each model involved in the CIMA hydrometeorological chain on the example of Medicane Apollo.

During the last week of October 2021 an intense Mediterranean hurricane (medicane), named Apollo, affected many countries on the Mediterranean coasts. The deaths toll peaked up to 7 people, due to flooding from the cyclone in the countries of Tunisia, Algeria, Malta, and Italy.

The Apollo medicane persisted over such areas for about one week (24 October – 1 November 2021) and produced very intense rainfall phenomena and widespread flash flood and flood episodes especially over eastern Sicily on 25-26 October 2021.

CIMA Foundation hydro-meteorological forecasting chain, including the cloud-resolving WRF model assimilating radar data and in situ weather stations (WRF-3DVAR), the fully distributed hydrological model Continuum, the automatic system for water detection (AUTOWADE), and the hydraulic model TELEMAC-2D, has been operated in real-time to predict the weather evolution and the corresponding hydrological and hydraulic impacts of the medicane Apollo, in support of the Italian Civil Protection Department early warning activities and in the framework of the H2020 LEXIS and E-SHAPE projects.

This work critically reviews the forecasting performances of each model involved in the CIMA hydrometeorological chain, with special focus on temporal scales ranging from very short-range (up to 6 hours ahead) to short-range forecasts (up to 48 hours ahead).