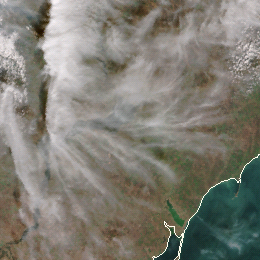 The image below shows thin low-level water cloud along the Italian coast of the Adriatic Sea and thin cirrus clouds across the Adriatic Sea. Both clouds appear bluish grey over the dark blue sea background. Thin cirrus over the land appears greenish/brownish grey. 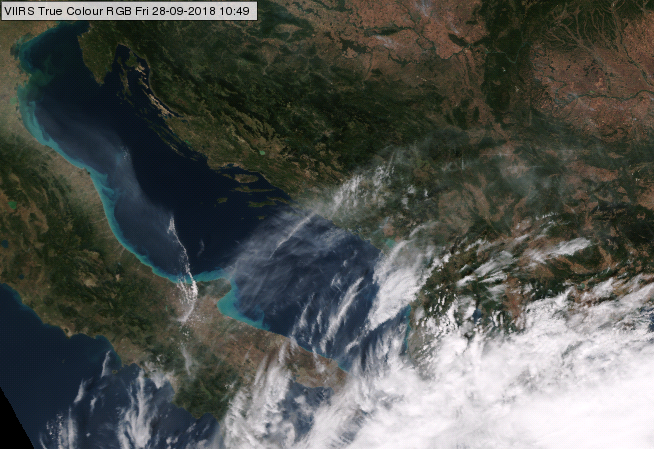 The next image shows the Alps region by True Colour RGB (left) and Cloud Type RGB (right). High level lee cloudiness is seen south-east of the Alps. The Cloud Type RGB is very sensitive to the thin cirrus clouds over cloud-free areas appearing red in this RGB type. Comparing the two panels one can see that thin ice clouds appear either grey in True Colour RGB or are not seen at all.

Note that:
• The cloud colour depends on the solar and satellite viewing directions as well. Towards the edge of the swath the greyish colour may be brighter, while along the sub-satellite track it might be paler. A thin cloud is usually better seen on the edge of the swath.
• The True Colour RGB is sensitive to thin low-level clouds, while other RGB types (like Dust and Night Microphysics RGBs) which are famous for being sensitive to thin clouds are sensitive mainly to the thin mid- and high-level clouds.
• High concentration aerosol plums also appear greyish.
• Thick cloud and snow appear white.

Explanation of the colour of thin clouds in the True Colour RGB (see the recipe):

Thin clouds are semi-transparent. Radiance coming from below can go through the cloud. The satellite observes a combined signal from the thin cloud itself and from the ground:
• Radiation scattered by the cloud elements into the direction of the satellite sensor and
• Radiation transmitted through the thin cloud in the direction of the satellite sensor.
The weighting factor of the combination depends on the cloud transmissivity. This is true for all three channels the RGB is combined from.

As a consequence, the colour of the thin clouds depends partly on the cloud characteristics (such as transmissivity, reflectivity) and partly on the characteristics/colour of the underlying surface: which can be land, sea or lower level cloud. A thin cloud over dark background such as sea or vegetated land appears greyish. A thin cloud over lower level clouds is not really seen by its colour shade, it might be seen because of the shadow it casts.

A very thin ice cloud is not seen in visible spectral range.