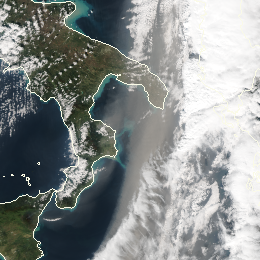 True Colour RGB images are ‘Rayleigh corrected’. This means the impact of Rayleigh scattering by the atmospheric molecules has been removed. This makes the images clearer. However, the impact of the aerosols’ scattering is not removed. In case of high aerosol concentration (e.g. dust plumes), the image become blurred. In fact, this is one of the strengths of the True Colour RGB: it is quite sensitive to particulate matter in the atmosphere like smoke, smog, haze and dust.

The structure of an aerosol plume in satellite imagery is usually much more homogeneous than that of a water or ice cloud. A thin dust plume, further away from its source area, mostly resembles a blurred (brownish) greyish veil. Its detection is easier against a dark background, but if the aerosol concentration is high enough the dust cloud is recognisable over land as well.

In the next images, a dust plume coming from the Sahara is seen in brownish, greyish colour over the Atlantic Ocean. The coast of western Africa is on the right side of the image. The image was taken one day after the dust really started to be pushed off the African coast over the Atlantic. 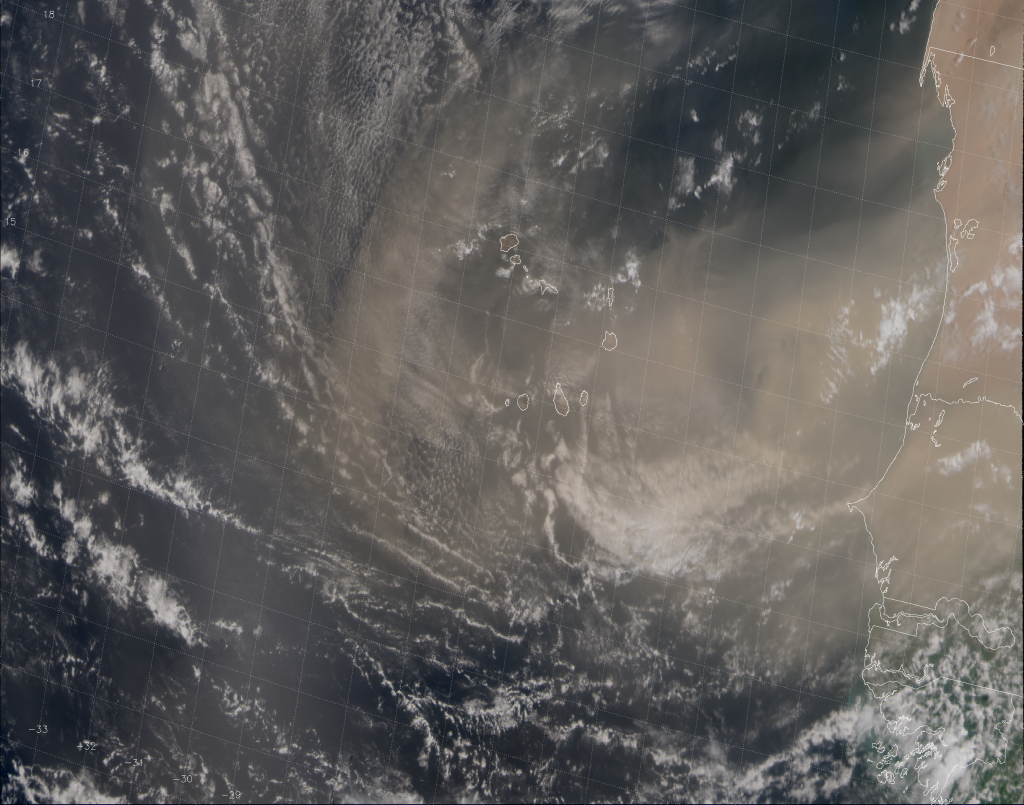 Over the following days the dust plume was pushed across the Atlantic Ocean. In the image below, the dust plume extends from one side of the swath to the other – over 3000 km.

The image below shows a dust cloud over the Mediterranean Sea and Italy. On the VIIRS Dust RGB (right panel) the pink colour indicates the dust cloud. This help to delineate the dust plume on the True Colour RGB (left panel). 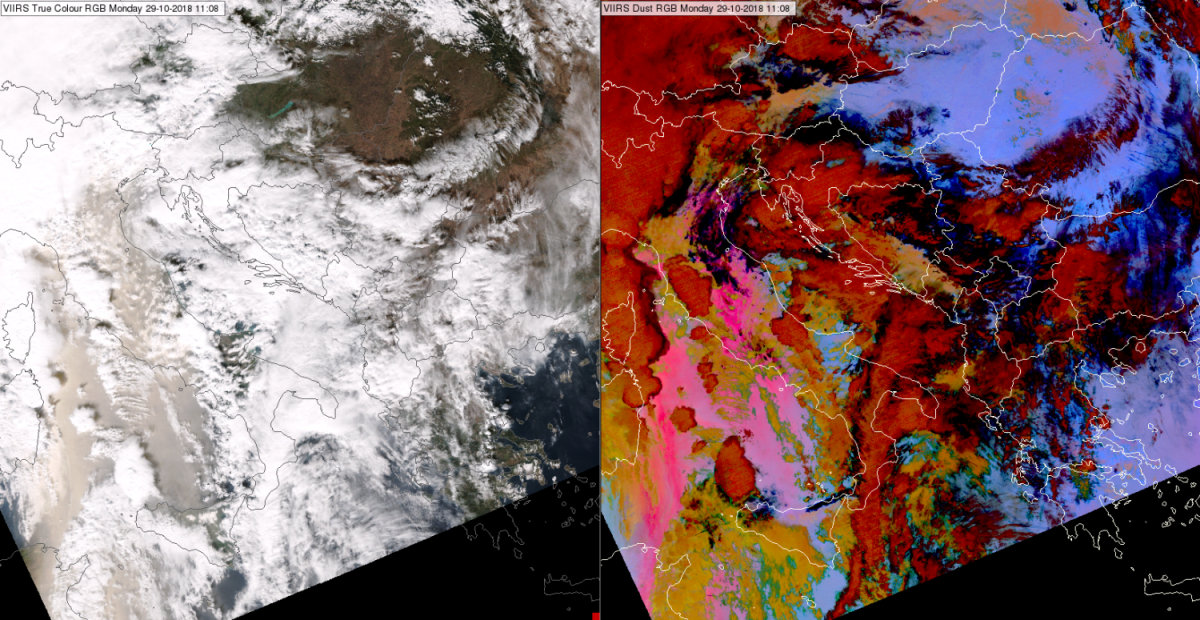 The next image shows dust clouds over the Black Sea region. Here, the dust plume appears grey, not brownish grey, maybe because of the lower concentration. The dust plume is better seen over the sea, but its presence can be suspected over the land as well: south of the Black Sea and also in the cloud-free area indicated by the arrows. Here the colour shade is different from usual. 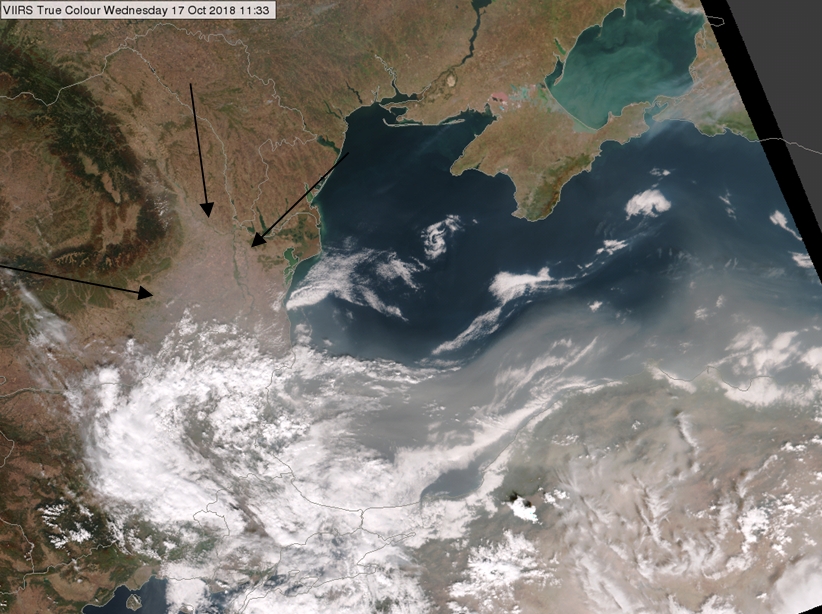 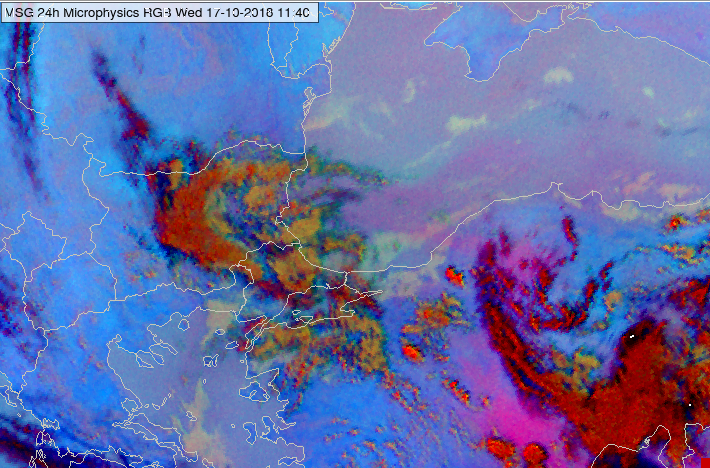 The last example shows another dust cloud over the Mediterranean Sea some days later. The grey blurred area indicated by yellow arrows delimits the dust plume. 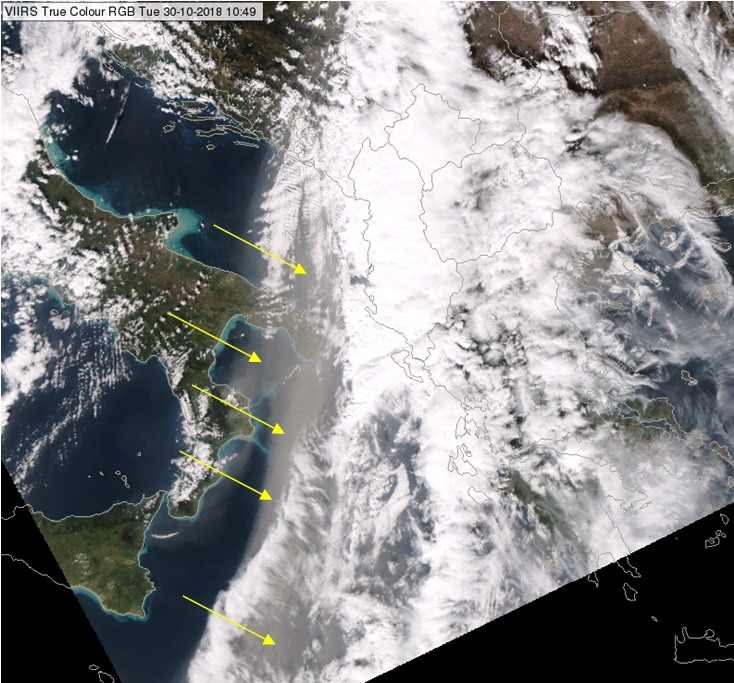 Note that:
• The aerosol plumes usually appear grey in the True Colour RGB images. The grey shade may indicate the type of the aerosol. Dust clouds tend to be brownish grey, biomass smoke tends to be bluish grey, while haze appear grey.
• Towards the edge of the swath a dust plume looks thicker, while along the sub-satellite track it looks thinner.
• Thin ice or water clouds similarly appear greyish in the True Colour RGB. However, thin ice clouds have usually a different texture.

Explanation of the colour of dust clouds in the True Colour RGB (see the recipe):

The aerosol particles scatter the radiation in the visible wave length. The reflectivity of a thick aerosol plume depends on its concentration, the aerosol type (composition), the average particle size, solar angle and satellite viewing angles and on the wavelength.

In case of a thin dust cloud, the measured radiance depends on the characteristics/reflectivity of the underlying surface as well. The satellite observes a combined signal from the ground and the cloud:
• Radiation scattered by the dust particles into the direction of the satellite sensor and
• Radiation transmitted through the thin dust plume in the direction of the satellite sensor
The weighting factor of the combination depends on the dust cloud transmissivity.

So, although a thick dust cloud appears brownish grey in the True Colour RGB, a thin dust plume may ‘loose’ its brownish shade and becomes grey.